This is the minimum amount of resources a person needs to meet basic human needs such as food, clean water, shelter and clothing.

People are in relative poverty if they are living below a certain income threshold in a particular country. This is normally when someone earns well below the median level of income of a country.

Other measures of poverty

This is a composite poverty index that is split into two indices.

This is a measure of deprivation in the poorest countries of the world. The three main elements of this index are the following.

This measure is used for developed countries around the world.

What factors influence changes in absolute and relative poverty?

What is the difference between income and wealth?

Income is a flow concept, e.g. the money earned over a period of time. This is usually generated from a salary.

This is a stock concept and to do with the assets a person owns. E.g. property, shares, car, yacht etc.

What can be used to measure Income Inequality

The Lorenz curve highlights the income distribution of a country against its population. 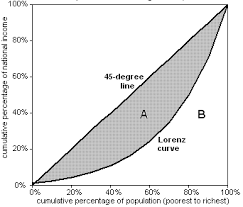 The further the Lorenz curve is from the 45-degree line, the less equal the distribution of income will be.